Beyond Macaca: The Photograph That Haunts George Allen 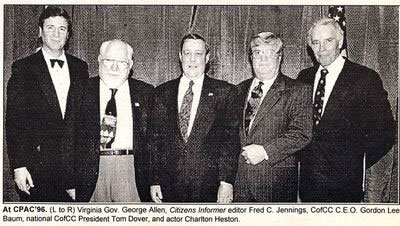 Barnstorming around Virginia in the re-election campaign that Republican Senator George Allen hopes will provide the impetus for his 2008 run for the presidency, he has suddenly been forced on the defensive. Time and again, he has felt compelled to explain that his mocking of S.R. Sidarth, a young Indian-American staff member for his Democratic opponent, as "macaca," or monkey, was an unintentional gaffe. "It was a mistake. I made a mistake," he told a reporter from a local NBC affiliate at a campaign stop on Thursday. Hours later, he told the ABC affiliate, "It was a mistake, I was wrong." On Fox News's Sean Hannity show, he echoed, "It was a mistake."

But was it an isolated "mistake"?

Only a decade ago, as governor of Virginia, Allen personally initiated an association with the Council of Conservative Citizens, the successor organization to the segregationist White Citizens Council and among the largest white supremacist groups.