What Are They Hiding, Exactly?

American politics is a tiresome game: one side cheats, lies, and steals, while the other plays a pee-wee league game of special rules and gentlemanly handshakes.

Case in point: NSA Warrantless Wiretapping. The GOP lies its ass off, and the Dems play a gentleman's game and fall right into the trap.

Democrats are allowing the general public to believe that we think it's wrong to wiretap terrorists--and this issue is going to kill us unless we do something about it.

GOP: We need to wiretap terrorists to protect America!
Dems: But Bush's wiretapping is an illegal invastion of privacy!

In fact, most Americans find the so-called Progressive argument here pathetic--and rightly so.

If you need any further proof, here are three recent political cartoons about the NSA program: 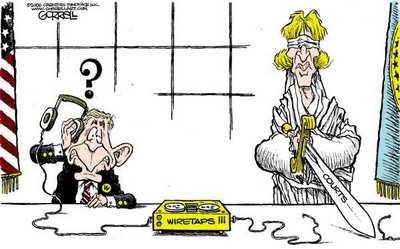 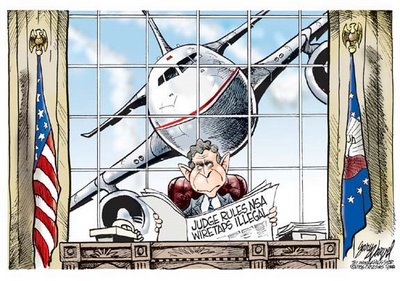 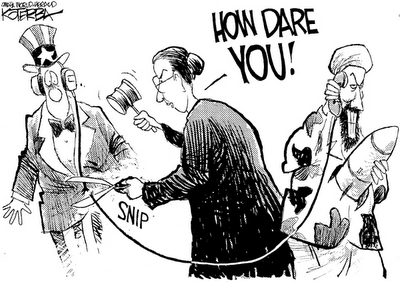 It's high time that Democrats made something very clear to the American people: THIS IS NOT AN ISSUE OF BALANCING SECURITY VERSUS CIVIL LIBERTIES. In a battle between Security and Civil Liberties, Civil Liberties usually loses. ON THE CONTRARY: We think it's a great idea to wiretap terrorists--just get a warrant so that we know you're actually spying on terrorists.

This is so preposterously easy to frame that it defies belief that our national Dems aren't already doing so.

More importantly, however, if I'm a Democrat with a national voice, here's what I say: "The whole purpose of getting a warrant--and they're really easy to get--is to make sure that the person being spied on is really a terrorist suspect, and not a political opponent or ordinary American. The ONLY reason NOT to get a warrant is if they wanted to spy on somebody who wasn't a terrorist. My question is, what are they trying to hide?"

END OF LINE. It's really that easy.

This is a question of TRUST. All Constitutional questions aside, the reason that Democrats have a problem with the NSA program is because we KNOW that it's being used to spy on political opponents--we just can't prove it. The reason Republicans have no problem with it is because they TRUST Bush is using it to keep them safe.

What we have to erode in the minds of the American public is TRUST. And we don't do that by screaming about civil liberties or Constitutional niceties.

We erode TRUST by letting the American people know that the Republicans are HIDING something. They're spying on ALL of us--if they weren't, why wouldn't they just get a warrant? WHAT ARE THEY HIDING?

If the law as written weren't good enough, why wouldn't they just change the law? WHAT ARE THEY HIDING?

Erode trust, and you win. Whine about constitutional liberties, and you lose.

"WHY NOT GET A WARRANT?" "WHAT ARE THEY HIDING?" "CAN YOU REALLY TRUST THEM?"

It's time to come out swinging, get out of the pee-wee leagues, and get into the big leagues. Ask the TOUGH questions, Dems. The ones that will erode TRUST in the GOP.