Who's Responsible for $4 a gallon gas?


And here's another one: 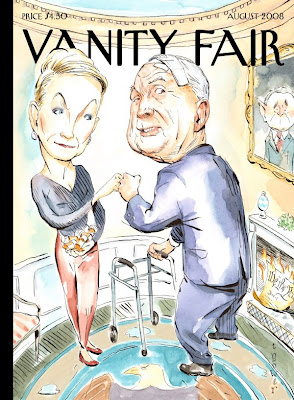 Last Monday (July 14), the New York Times ran an op-ed from Barack Obama on his vision for U.S. policy towards Iraq. It was a very strong column, which as one might expect, described the kind of strategy Obama would pursue as president. It was far more policy driven than political — it referenced John McCain only three times in a 900-word piece — and explained why it’s critically important to have a “useful debate,” instead of another round of “false charges about flip-flops and surrender.”

The McCain campaign thought it’d be great if the NYT offered the presumptive Republican nominee a similar opportunity, and submitted its own 900-word op-ed piece. There was just one problem that the Times editors couldn’t help but notice: the column was dreadful.

The New York Times has rejected an op-ed piece written by John McCain defending his Iraq war policy in response to a piece by Barack Obama published in the paper last week.

In an e-mail to the McCain campaign, Opinion Page Editor David Shipley said he could not accept the piece as written, but would be “pleased, though, to look at another draft.”

“Let me suggest an approach,” he wrote. “The Obama piece worked for me because it offered new information (it appeared before his speech); while Senator Obama discussed Senator McCain, he also went into detail about his own plans. It would be terrific to have an article from Senator McCain that mirrors Senator Obama’s piece.”

For reasons that escape me, Republicans have decided that this is an outrageous example of media bias. I haven’t the foggiest idea what they’re talking about.

The conservative take on this, in a nutshell, is that the NYT gave Obama a platform, so it should give McCain an equal opportunity. The Times publishes op-ed pieces from all kinds of people from around the world; why should McCain be excluded?

But that’s not at all what happened here. The Times was fully prepared to give McCain a platform; the editors simply wanted a substantive, policy-driven piece. Indeed, instead of a flat rejection, the Times told the McCain campaign, in a rather friendly way, that it would be “pleased, though, to look at another draft.”

It is standard procedure on our Op-Ed page, and that of other newspapers, to go back and forth with an author on his or her submission. We look forward to publishing Senator McCain’s views in our paper just as we have in the past. We have published at least seven Op-Ed pieces by Senator McCain since 1996. The New York Times endorsed Senator McCain as the Republican candidate in the presidential primaries. We take his views very seriously.

That’s not a rejection; it’s an invitation.

Go ahead and read McCain’s submitted piece. It has 12 paragraphs — 11 of which attack Obama directly. Obama’s piece focused on Obama’s vision for a sensible U.S. policy towards Iraq. McCain’s submission was a hit-job, focused exclusively on attacking Obama. While Obama’s op-ed mentioned McCain three times, McCain’s op-ed mentioned Obama 10 times by name, and 17 times through pronouns.

The sticking point seems to be over the Times’ request that McCain not only talk about “victory” in Iraq, but actually take a moment to explain what that means. The campaign doesn’t want to do that — and by every indication, it can’t do that. Even being asked to define “success” is, apparently, considered a personal affront.

That the McCain campaign can’t bring itself to write one, and is whining about even being asked, speaks volumes about John McCain’s clarity and judgment.

U.S. Military Wastes Money On Generals who need "Comfort Capsules." Maybe we should ask them if their pussies hurt too.

But the Air Force has run into congressional objections to its 'comfort capsules,' designed for top brass.

WASHINGTON -- The top Air Force leadership sought for three years to spend counter-terrorism money on "comfort capsules" for military planes to ease the travel of senior officers and civilian leaders -- with at least four top generals involved in design details such as the color of the capsules' carpet and leather chairs -- according to internal e-mails and budget documents.

Production has begun for the first capsule -- two sealed rooms that can fit in the fuselage of a large aircraft -- and four mobile pallets containing plush, swiveling leather chairs with footrests.

Air Force officials say the new capsules are necessary to ensure that leaders can talk, work and rest comfortably in the air. But the top brass' preoccupation has alienated lower-ranking Air Force officers familiar with the effort, as well as congressional staff and a nonprofit group that calls the program a waste of money.

Air Force documents spell out how each capsule is to be "aesthetically pleasing and furnished to reflect the rank of the senior leaders using the capsule," with beds, a couch, a table and a 37-inch flat-screen monitor with stereo speakers.

The effort has been slowed by congressional resistance to using counter-terrorism funds for the project and by internal deliberations about generals' demands for modifications.

One request was that the leather for the seats and seat belts in the mobile pallets be Air Force blue instead of brown and that seat pockets be added. Another was that the table be darker.

Changing the seat color and pockets alone was estimated in a March 12 internal document to cost at least $68,240.

In all, for the last three years the service has asked to divert $16.2 million from the war on terrorism to the capsules. Congress has twice told the service no, including in an August 2007 letter from Rep. John P. Murtha (D-Pa.) to the Pentagon ordering that the money be spent on a "higher priority" need.

Officials say the Air Force nonetheless decided last year to take $331,000 from counter-terrorism funds to cover a cost overrun, partly stemming from the design changes, although a senior officer said in response to inquiries that it would reverse that decision.

The internal Air Force e-mails, provided to the Washington Post by the nonprofit Project on Government Oversight and independently authenticated, make clear that lower-ranking officers on the project have been pressured to create what one described as "world-class" accommodations finer than a business-class flight.

"I was asked by Gen. [Robert H.] McMahon what it would take to make the [capsule] . . . a 'world-class' piece of equipment," an officer at the service's Air Mobility Command said in a March 2007 e-mail to a colleague, referring to the command's top officer then. "He said he wanted an assurance . . . that we would be getting a world-class item this week."

Air Force officials say the program dates from a 2006 declaration by Air Force Gen. Duncan McNabb that existing seats on transport planes, including some that match those on commercial airliners, might be fine for airmen but were inadequate for the brass. McNabb was then the Air Mobility commander; he is now the Air Force's vice chief of staff. Defense Secretary Robert M. Gates nominated him in June to lead the military's Transportation Command.

Explaining his instructions to subordinates, McMahon said he used the term "world-class" "in just about everything I discuss. . . . That represents an attitude." He said he wanted to "create an environment" that passengers "would be proud of," the government would be proud of and "the people of the United States" would be proud of.

Construction of what the Air Force initially termed the new Senior Leader Intransit Comfort Capsules began under a contract paid from general Air Force funds. One of the 18-by-9-foot capsules has been partly completed.

McMahon said the program has recently been downsized from 10 capsules to three, plus the four pallets fitted with swiveling leather chairs, known as Senior Leader Intransit Pallets.

Because of the cutback in the number of capsules and pallets, the program is currently estimated to cost $7.6 million.