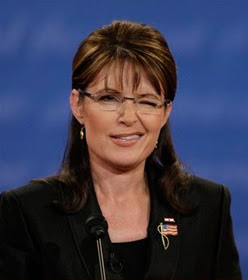 After watching Sarah Palin at the debate last night all I could think of was, Jesus I'm watching Bush in 2000 all over again.

She clearly had memorized her talking points. And she obviously had no idea what they meant just like George Bush in 2000.

Every time Biden pointed out that her "philosophy" of less taxes and less government was the governing philosophy of the last eight years, she claimed that he was just "looking backwards."

Looking backwards? That's the best she could come up with? I wish Biden had said once, "Yep, I'm looking backwards, because those who forget history are condemned to repeat it. And if you elect Sarah Palin and John McCain you'll get 4 more years of the last eight."

When she was asked a question that she didn't know the answer to or handn't memorized any talking points, she simply sidestepped the question. I can just see her having discussions with foreign leaders and when they ask a question she knows nothing about, she'll just start talking about Wasilla. Or drilling for oil.

The only thing I liked less than Sarah Palin's answers were Gwen Ifill's questions. Softball after softball that allowed the candidates to talk about whatever they wanted in response. No follow ups. Not once did she ask what either of them meant by what they said.