And Now a Brief Musical Interlude:

Mukasey used his sharpest words yet to criticize the senior leaders who took part in or failed to stop illegal hiring practices during the tenure of his predecessor, Alberto Gonzales.

But, he told delegates to the American Bar Association annual meeting, "Not every wrong, or even every violation of the law, is a crime. In this instance, the two joint reports found only violations of the civil service laws."

Other intrusions of Bush administration politics into department hirings and firings remain under investigation. Justice officials say the attorney general's remarks do not preclude criminal prosecutions if wrongdoing is found in the firing of nine U.S. attorneys in 2006 and the hiring practices in the department's civil rights division.

The Vermont Democrat said Mukasey's remarks "appear premature based on the facts and evidence that congressional investigators and the inspector general have uncovered so far" in the hiring scandal. "We must continue to pursue the truth and facts, and hold any wrongdoers accountable," Leahy said.

The federal government makes a distinction between "career" and "political" appointees, and it's a violation of civil service laws and Justice Department policy to hire career employees on the basis of political affiliation or allegiance.

Mukasey, who once was a federal judge in New York, said the Justice Department has taken steps under his leadership to prevent a recurrence of the hiring scandal.

"I have made repeatedly clear ... that it is neither permissible nor acceptable to consider political affiliations in the hiring of career department employees," Mukasey said.

If the problems were to recur, Mukasey said, he is confident department employees would speak up.

That did not happen during Gonzales' tenure, he said. Gonzales appeared unaware of the political hiring process outlined by Goodling and his then-chief of staff, Kyle Sampson, the report said.

Sen. Charles Schumer, D-N.Y., said more must be done to prevent political hiring at the agency. "Even if it is true they didn't commit a crime, it would be appropriate to make what they did a misdemeanor so that in the future, those who violate the civil service laws cannot escape unscathed," Schumer said in a statement.

The ABA has been at odds with the Bush administration on a range of issues, including treatment of prisoners suspected of terrorist ties and the need for a federal law to shield reporters from subpoenas.

Mukasey said that on the issue of politics in his department, there was no disagreement with the lawyers' group.

"Professionalism is alive and well at the Justice Department," he said.

Some candidates for career Justice Department jobs who were excluded because of politics could be invited to apply for new positions, Mukasey said.

He also ruled out firing or reassigning those who were hired under the now-discarded evaluation process.

"Two wrongs do not make a right," he said. "People who were hired in an improper way didn't themselves do anything wrong."

Add Your Own Caption 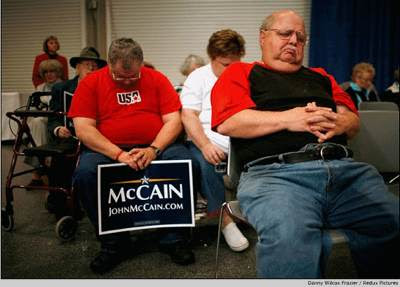 How can impeachment be off the table if there is proof that documents that linked al Qaeda to Saddam or documents that made the case for invading Iraq were forged by the Office of Special Plans/Doug Feith/Dick Cheney/Scooter Libby or whoever else may have forged them?

How can impeachment be off the table if over 4,000 American troops were killed, tens of thousands more injured, not to mention all of the Iraqis who have been killed, displaced or had their lives ruined when intelligence officials spoke on the record about Bush knowing that Iraq had no WMDs, yet repeated this charge over and over and over and over?

Of course there were flat out denials of this by those close to the White House, as well as many rightist bloggers. But they have denied other lies and actions that have been proven to have occurred (or not occurred), or said (or not said) when it comes to this administration and its’ enablers in Congress.

But that isn’t the point. If even The American Conservative says that Dick Cheney is behind the forgery, and there is a tape and transcript that corroborates this assertion, then isn’t it Congress duty to, at a minimum, initiate investigations and hold hearings to determine whether there was a deliberate attempt to lie this country into an invasion?

Didn’t Pelosi herself say that the most important thing about the Democrats regaining the majority control is the use of subpoena power? And while "drudging up things from the past" may not be what she or others in Congress want to do, if agents are willing to go on the record and indicate that the Office of the Vice President was directly involved in forging documents to make the case for invading Iraq, then Congress really doesn’t have a choice.

It is the duty and responsibility of them to "preserve, protect and defend the Constitution of the United States", whether they want to or not.

smintheus did an excellent analysis of the claims last week, and I would be hard pressed to think that a good number of the most gung ho republicans and especially military personnel would be appalled that the use of the United States military was used to further top Executive Branch officials’ political and personal goals – especially if it was based on forged documents.

This may or may not ultimately turn out to be true. It may or may not lead to other evidence being uncovered. Once one or two people talk on record – especially when there was such contempt towards the intelligence community (in their area of expertise, mind you) by the Executive Branch and Defense Department – more people may be inclined to come forward.

Even Joe Conason (a man who certainly has a very solid overall track record) says that, at a minimum, this should be the basis for investigations:

Setting aside the relative credibility of the author and the government, the relevant question is whether the available facts demand a full investigation by a congressional committee, with testimony under oath.

When we look back at the events surrounding the emergence of the faked letter that is at the center of this controversy, a strong circumstantial case certainly can be made in support of Suskind's story.

Now, the fact that Congress has allowed subpoenas to go ignored by so many administration officials with no consequence is already a horrible precedent to have set. That kind of negates the whole "subpoena power" thing that Pelosi was talking about a few years ago. But Congress has to make amends here or deem themselves irrelevant when it comes to that whole "checks and balances" thing. And if the OVP may have already done this once with Iraq (and already tried to levy false charges against Iran to make the case for bombing), then what is to stop them from doing it again - especially if McCain wins the Presidency?

If there is nothing to the charges, so be it. However, there are intelligence officials on tape and on the record that have already said that Cheney and his office were behind forgeries to sell the Iraq invasion as well as Bush knowing that Iraq had no WMDs. Put them under oath and if they are denying their comments now, they can clarify if they were lying before or if they want to lie under oath.

But this is a string that is hanging which needs to be pulled on. If it unravels a bigger picture and criminal acts, then that is only good for the Constitution, the rule of law and the future of this country. If it goes nowhere, then at least there were meaningful investigations.

Congress is out of session now, but this should be one of the first items on the agenda of the Judiciary Committees when it returns.

To pretend that the charges don’t exist and to not investigate by putting these intelligence officials under oath is a tacit approval of forging documents to make the case for invading a sovereign nation.

And both the forgeries themselves as well as the lack of meaningful investigations is nothing short of treason.