Boehner Raising More From Lobbyists And Corporate PACs Than DeLay 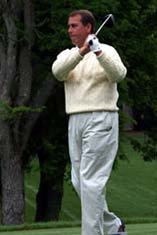 When he was running for Majority Leader, Rep. John Boehner (R-OH) pledged to end the K Street Project for lobbyists and “lead the effort to bring about the kind of reforms the American people are expecting from Congress.”

But a new review of financial holdings shows Boehner has raised corporate and lobbyist contributions at a faster clip than even corrupt, criminally-indicted former Rep. Tom DeLay:

[Boehner] has been holding fund-raisers at lobbyists’ offices, flying to political events on corporate planes and staying at a golf resort with a business group that has a direct stake in issues before Congress.

Boehner…has raised campaign contributions at a rate of about $10,000 a day since February, surpassing the pace set by former Representative Tom DeLay after he became majority leader in 2002, a review of federal filings shows. […]

The contributions aren’t for nothing. Just yesterday, CongressDaily reported that Boehner is finally considering allowing a full House vote to increase the minimum wage. The catch? The bill will also include a set of corporate tax breaks:

Republicans pressing for a vote on raising the minimum wage say House Majority Leader Boehner is working to write a bill that likely would include tax breaks for businesses. Reps. Frank LoBiondo, R-N.J., and Steven LaTourette, R-Ohio, met Thursday with Boehner to urge him to take up the issue. “He is optimistic they can get something meaningful accomplished” by the end of July, said a LaTourette spokeswoman.