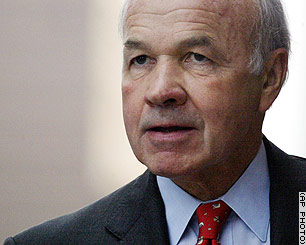 Too bad he got to spend the last four years at his Multimillion dollar vacation home in Colorado before the Lord called him home.

Although frankly I don't actually believe it. He's probably been moved to Argentina just like the Nazi's. I think I'm gonna need to see the body. Maybe they could frame a picture in a nice big gold frame so we could all see that he is in fact dead. I may still need at least two coroner's reports, preferably one of them from a Democrat.

HOUSTON - Enron Corp. founder Kenneth Lay, who was convicted of helping perpetuate one of the most sprawling business frauds in U.S. history, has died of a heart attack in Colorado. He was 64.

A secretary at his church and another secretary for his lead criminal lawyer, Michael Ramsey, both confirmed the death. Lay, who lived in Houston, frequently vacationed in Colorado.

Lay, who faced life in prison, was scheduled to be sentenced Oct. 23.

Nicknamed “Kenny Boy” by President Bush, Lay led Enron’s meteoric rise from a staid natural gas pipeline company formed by a 1985 merger to an energy and trading conglomerate that reached No. 7 on the Fortune 500 in 2000 and claimed $101 billion in annual revenues.

He was convicted May 25 along with former Enron CEO Jeffrey Skilling of defrauding investors and employees by repeatedly lying about Enron’s financial strength in the months before the company plummeted into bankruptcy protection in December 2001. Lay was also convicted in a separate non-jury trial of bank fraud and making false statements to banks, charges related to his personal finances.

Lay had built Enron into a high-profile, widely admired company, the seventh-largest publicly traded in the country. But Enron collapsed after it was revealed the company’s finances were based on a web of fraudulent partnerships and schemes, not the profits that it reported to investors and the public.

When Lay and Skilling went on trial in U.S. District Court Jan. 30, it had been expected that Lay, who enjoyed great popularity throughout Houston as chairman of the energy company, might be able to charm the jury. But during his testimony, Lay ended up coming across as irritable and combative.

He also sounded arrogant, defending his extravagant lifestyle, including a $200,000 yacht for wife Linda’s birthday party, despite $100 million in personal debt and saying “it was difficult to turn off that lifestyle like a spigot.”

Both he and Skilling maintained that there had been no wrongdoing at Enron, and that the company had been brought down by negative publicity that undermined investors’ confidence.

His defense didn’t help his case with jurors.

“I wanted very badly to believe what they were saying,” juror Wendy Vaughan said after the verdicts were announced. “There were places in the testimony I felt their character was questionable.”