Legal Advocate For Torture Being Considered For Top Judicial Post 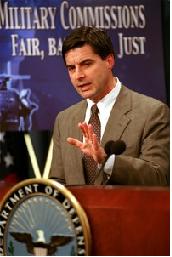 The Financial Times reports this morning that the Pentagon, guided by General Counsel William Haynes, recently reversed course and decided that all detainees held in U.S. military custody are entitled to protection under the Geneva Conventions. The timing of the announcement appears in part to have been guided by an administration effort to build support for Haynes, whose nomination to sit on the 4th Circuit was taken up by the Senate Judiciary Committee today.

Haynes — who is strongly backed by Vice President Cheney — has been described as a “prime mover” in the effort to contravene the dictates of the Geneva Convention with respect to the interrogation of prisoners. A 2003 working group appointed and supervised by Haynes argued the Geneva Conventions “must be construed as inapplicable to interrogations undertaken pursuant to [Bush’s] Commander-in-Chief authority.” That position, as applied to military commissions, was repudiated by the Supreme Court in the recent Hamdan decision.

A group of 20 retired military leaders recently wrote to Sens. Arlen Specter and Patrick Leahy to express their “deep concern” about the nominee (Read it HERE):

Had Mr. Haynes been ignorant of the likely consequences of these policies, the profound errors he made could perhaps be understood. But the uniformed JAGs of each of the services clearly and repeatedly expressed their concerns about the impact these policies would have both on the reputation of the United States and on the integrity and safety of military personnel. … These prescient warnings were echoed by the flag officer Judge Advocates General of the Navy, Air Force and Marine Corps. But Mr. Haynes failed to heed them.

Writing in a separate letter, former Judge Advocate General of the Navy John Hutson argued, “If civilian leadership of the military means anything at all, it must mean there is accountability for failures such as his.” Read it HERE.