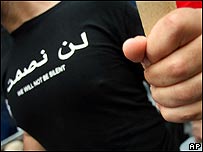 An architect of Iraqi descent has said he was forced to remove a T-shirt that bore the words "We will not be silent" before boarding a flight at New York.

Raed Jarrar said security officials warned him his clothing was offensive after he checked in for a JetBlue flight to California on 12 August.

Mr Jarrar said he was shocked such an action could be taken in the US.

US transport officials are conducting an inquiry after a complaint from the US Arab Anti-Discrimination Committee.

JetBlue said it was also investigating the incident but a spokeswoman said: "We're not clear exactly what happened."

Mr Jarrar's black cotton T-shirt bore the slogan in both Arabic and English.

He said he had cleared security at John F Kennedy airport for a flight back to his home in California when he was approached by two men who wanted to check his ID and boarding pass.

Mr Jarrar said he was told a number of passengers had complained about his T-shirt - apparently concerned at what the Arabic phrase meant - and asked him to remove it.

He refused, arguing that the slogan was not offensive and citing his constitutional rights to free expression.

Mr Jarrar later told a New York radio station: "I grew up and spent all my life living under authoritarian regimes and I know that these things happen.

"But I'm shocked that they happened to me here, in the US."

After a difficult exchange with airline staff, Mr Jarrar was persuaded to wear another T-shirt bought for him at the airport shop.

"We Will Not Be Silent" is a slogan adopted by opponents of the war in Iraq and other conflicts in the Middle East.

It is said to derive from the White Rose dissident group which opposed Nazi rule in Germany.