In early 2001, Vice President Cheney brought together an energy task force made up of “utility companies and the oil, gas, coal and nuclear energy industries,” and “incorporated their recommendations, often word for word,” into the administration’s energy plan.

One year ago today, President Bush signed that plan into law. It lavished $14.5 billion in tax breaks on energy firms, nearly 60 percent of which went to “oil, natural gas, coal, electric utilities and nuclear power.” 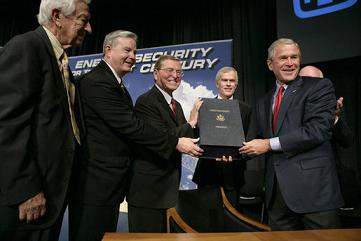 As recently as April, Bush claimed the energy bill would help take “pressure off the price of gasoline at the pump.” It hasn’t worked out that way, as the chart below shows. (Click here to see the full image, courtesy of the minority staff on the House Government Reform Committee.) 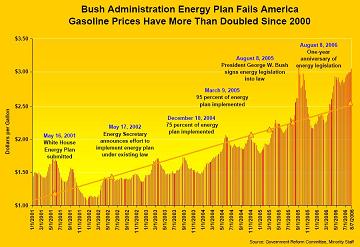 Meanwhile, President Bush’s 2007 budget proposed funding “less than half of what the recent energy bill promised for renewable energy and energy efficiency — the two most readily available opportunities to break our addiction to oil.”