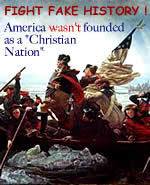 Talk To Action is hosting a fundraiser for historian Chris Rodda, so that she can continue with her vital work. If you're bothered that a falsified version of American history is being taught in hundreds of American public high schools (see end of this post for Rodda's series documenting that), you can help in two ways. First, you can donate money to a fund to help Chris Rodda continue her work debunking fake history [donation link in full story]. Second, and just as importantly, you can help us publicize this story and fundraiser by mailing this Talk To Action story, and the link to the story, to history teachers you know. So if you can't afford to donate money, you can still help Chris Rodda and Talk To Action by alerting your friends who care about history on how widespread the fake history problem has become.Donations here are not currently tax deductible
If you make a donation to Chris Rodda, you should receive a confirmation email and thank you note within 48 hours. If do not receive that confirmation, please letChris Rodda know at : LiarsForJesus@aol.com

Thank you, in advance, for your contribution, which will be, in my knowledge, one of the most cost-effective financial contributions towards fighting the Christian theocratic movement that you could possibly make. In the end, though, this is a non-partisan matter. We are entitled to our own opinions but not our own facts. And, even if you can't afford to make a financial contribution, you can help a great deal by sending this story to friends who care about history and historical accuracy

As Chris has recently demonstrated, in an ongoing series at Talk To Action, a falsified version of American history that depicts the United States as originally a "Christian Nation" is now being taught to American teenagers in hundreds of high schools across America and, as we've covered earlier on Talk To Action, this falsified history has spread so far that it has polluted the understandings of America's political and religious leaders, on the origin and role of American secular government.

As Frederick Clarkson, Co-Founder of this website, wrote in a recent Public Eye story entitled History is Powerful: Why the Christian Right Distorts History and Why it Matters:

The notion that America was founded as a Christian nation is a central animating element of the ideology of the Christian Right....

But the Christian nationalist narrative has a fatal flaw: it is based on revisionist history that does not stand up under scrutiny. The bad news is that to true believers, it does not have to stand up to the facts of history to be a powerful and animating part of the once and future Christian nation. Indeed, through a growing cottage industry of Christian revisionist books and lectures now dominating the curricula of home schools and many private Christian academies, Christian nationalism becomes a central feature of the political identity of children growing up in the movement. The contest for control of the narrative of American history is well underway.

Chris Rodda, author of Liars For Jesus: The Religious Rights' Alternate Version Of American History has worked with astounding tenacity, intelligence, and persistence, at debunking a falsified version of American history put out by David Barton and other historians on the Christian right. I have come to have a deep respect for Chris Rodda's commitment to historical accuracy, and I'm asking Talk To Action readers to, please, help make it financially possible for Chris to continue her vital research which currently includes a survey on the use of falsified history in Congressional debates over the past decade. At the end of this post is way you can make a contribution to a fund Talk To Action is collecting for Chris Rodda. The rewriting, and fabrication, of history can be most deadly expression of totalitarian impulses : those who control the past, the record of what has been, control the future. Falsified American history has seeped into not only homeschooling curriculum, America's public schools, and Congressional debates, but it also has distorted public understanding that the religious neutrality of American government was, and still is, key to the success of American democracy itself.