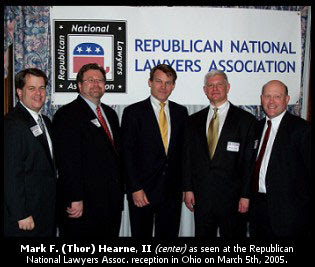 Just as the Bush administration’s claims of voter fraud are being dismantled, so too is the American Center for Voting Rights (ACVR) — a conservative front group that identified pervasive election fraud. Slate reports:

With no notice and little comment, ACVR — the only prominent nongovernmental organization claiming that voter fraud is a major problem, a problem warranting strict rules such as voter-ID laws — simply stopped appearing at government panels and conferences. Its Web domain name has suddenly expired, its reports are all gone (except where they have been preserved by its opponents), and its general counsel, Mark “Thor” Hearne, has cleansed his résumé of affiliation with the group. Hearne won’t speak to the press about ACVR’s demise. No other group has taken up the ‘voter fraud’ mantra.

ACVR was led by Bush/Cheney ’04’s general counsel and produced such reports as “Democrat operatives far more involved in voter intimidation and suppression in 2004 than Republicans.” Many of its studies targeted presidential battle ground states.

ACVR, whose work has been commended by Karl Rove, was part of the Bush administration’s “aggressive legal effort to restrict voter turnout in key battleground states in ways that favor Republican political candidates.” Conservatives cited ACVR’s studies as evidence of pervasive voter fraud.

Of the 38 cases of voter fraud the Justice Department prosecuted between 2002-05, 14 were thrown out. As the New York Times notes, “In partisan Republican circles, the pursuit of voter fraud is code for suppressing the votes of minorities and poor people.”