Fox News Downplays the Holocaust in an attempt to smear Obama. All these photos are from Buchenwald.. Fox's "work camp." 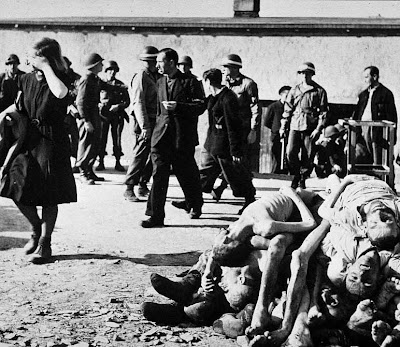 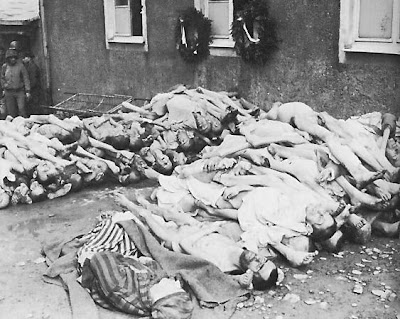 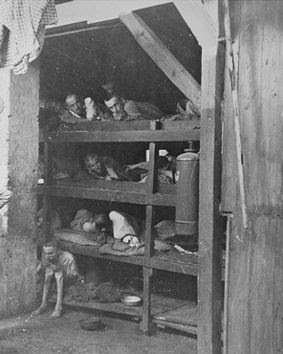 USING THE HOLOCAUST TO SMEAR OBAMA

I never thought I'd see the day when the Holocaust would be used as a tool for "gotcha" politics. But over the last two days, we have seen John McCain's supporters at the Republican National Committee and at Fox News launch tasteless attacks on Barack Obama. In their attempt to score a few political points, they have diminished the experience of those who suffered and died at Buchenwald, and disrespected the service of the heroic American troops who liberated them.

It started yesterday when the RNC put out a statement slamming Obama for referring to Auschwitz as he related a family story on Memorial Day. Instead of merely asking for clarification, the RNC smeared Obama's "dubious claim," and suggested -- tongue in cheek -- that perhaps Obama's uncle "was serving in the Red Army." They went on to say that the story raised questions "about his judgment and his readiness to lead as commander in chief."

It turns out that Obama's great uncle -- the brother of the grandmother who largely raised him -- served in the 89th Infantry Division of the United States Army, which liberated Ohrdruf, part of Buchenwald. But astonishingly, that only served to fan the flames for those on the right who saw an attempt to use the heroic service of Obama's uncle against him. In their breathless attempt to damage Obama, Fox News has stooped to a level that is truly depressing.

This morning on the program Fox and Friends, one of the hosts said: "It wasn't Auschwitz. It was a labor camp called Buchenwald." Just in case the point was missed, she repeated. "It wasn't Auschwitz, it was a labor camp. You would think you would want to be as specific as possible if you are telling one of these anecdotes." Meanwhile, a news "crawl" at the bottom of the screen reinforced, in bold letters, that this was "a work camp, rather than an extermination camp."

Here are some facts about Buchenwald, which is one of the most notorious Nazi concentration camps. At this "work camp," prisoners were often worked, starved, tortured, or beaten to death. Sometimes they were simply murdered. Roughly 250,000 people were imprisoned there between 1937 and 1945, many of them Jews. Over 50,000 people lost their lives.

At Nuremberg, the world was shocked to learn that some of Buchenwald's victims were skinned, and the human skin was then used to make lampshades, book covers, and other keepsakes. Buchenwald was also a site for the infamous Nazi "medical experiments" on prisoners, which were often nothing more than crude and horrific forms of torture.

To take just one anecdote about the "work" done at Buchenwald, prisoners had to build the camp road, and camp guards used to shoot those who were not carrying stones that were heavy enough. In the final days before liberation, some 10,000 prisoners from Auschwitz and Gross-Rossen were marched to Buchenwald, adding to the horrific scene that awaited American troops.

On April 4, 1945, Ohrdruf became the first Nazi concentration camp to be liberated by American forces. U.S. troops -- including the 89th Infantry Division -- found a scene that was vividly described by the Eisenhower Memorial Commission: "The scene was an indescribable horror even to the combat-hardened troops who captured the camp. Bodies were piled throughout the camp. There was evidence everywhere of systematic butchery. Many of the mounds of dead bodies were still smoldering from failed attempts by the departing SS guards to burn them."

Dwight Eisenhower and Omar Bradley would tour the camp in the days ahead. Eisenhower was so moved by the atrocities at this "work camp," that he wrote to his wife Mamie that it was "beyond the American mind of comprehend." He made both his own men and all of the citizens of the German town of Gotha tour the camp. He wanted the Americans to know the evil that they were fighting. He wanted German citizens to see what had been done in their name. After this tour, the Mayor of Gotha and his wife hanged themselves.

Many of the terrible photographs and videos that we have seen of the Holocaust come from these days. Eisenhower said that he wanted, "to give first-hand evidence if ever, in the future, there develops a tendency to charge these allegations merely to 'propaganda.'" The carefully documents attrocities at Buchenwald are thus part of the record that we use to confront anyone who would deny the horror of the Holocaust.

The men who liberated Buchenwald were heroes, plain and simple. That includes Barack Obama's great uncle. In their march across Europe, the 89th Infantry Division suffered over 1,000 casualties, with over 300 men killed. In their liberation of Buchenwald, they put an end to one of the most horrible concentration camps of the 20th century. We must honor them, just as we must remember each and every victim of the criminal Nazi regime.

To those who continue to use this story to damage Barack Obama, I have a simple question: have you no shame? You attempts to diminish his uncle's service for your own political gain says a lot more about you than it does about Barack Obama.