It's perfectly possible that Bruce Ivins really is the anthrax attacker -- that he perpetrated the attacks and did so alone. Perhaps the FBI is in possession of mountains of conclusive evidence that, once revealed, will leave no doubt that Ivins is the guilty party. But no rational person could possibly assume that to be the case given the paltry amount of facts -- many which contradict one another -- that are now known. Several points to note:

(1) Two prominent journalism professors -- Jay Rosen of NYU and Dan Gillmor at the Center for Citizen Media, affiliated with the Walter Cronkite School of Journalism & Mass Communication at Arizona State University and the Berkman Center for Internet & Society at Harvard University Law School -- have added their names to the list of people calling on ABC News and Brian Ross to reveal their sources for ABC's false bentonite story that was used to link the anthrax attacks to Iraq. Rosen and Gillmor both write that ABC and Ross should answer three questions which they jointly outline, and they both set forth the reasons, grounded in widely accepted principles of journalistic ethics, as to why ABC and Ross should do so.

(2) So much of the public reporting about Ivins has been devoted to depicting him as a highly unstable psychotic who had been issuing extremely violent threats and who had a violent past. But that depiction has been based almost exclusively on the uncorroborated claims of Jean Carol Duley, a social worker (not a psychiatrist or psychologist) who, as recently as last year, was apparently still in college at Hood's College in Frederick, Maryland. Duley's scrawled handwritten complaint against Ivins, seeking a Protective Order, has served as the basis for much of the reporting regarding Ivins' mental state, yet it is hardly the model of a competent or authoritative professional. Quite the opposite.

Duley herself has a history that, at the very least, raises questions about her credibility. She has a rather lengthy involvement with the courts in Frederick, including two very recent convictions for driving under the influence -- one from 2007 and one from 2006 -- as well as a complaint filed against her for battery by her ex-husband. Here is Duley's record from the Maryland Judicial data base: 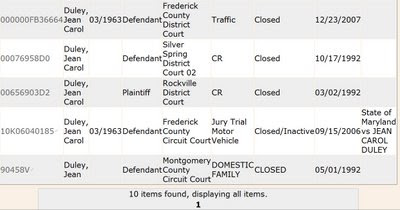 Just three months ago, Duley pled guilty and was sentenced to probation (and fined $1,000), as a result of having been stopped in December, while driving at 1:35 a.m., and charged with driving under the influence: 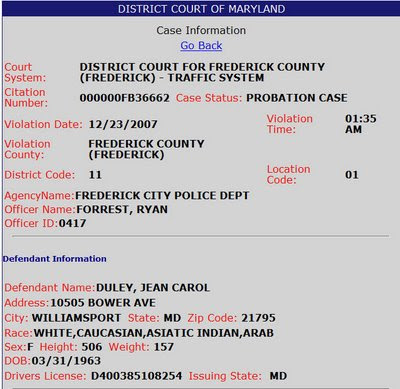 On April 21, 2006, Duley was also charged with "driving a vehicle while impaired by alcohol," driving "while impaired by drugs or alcohol," and reckless driving, and on October 13, 2006, she pled guilty to the charge of reckless driving and was fined $580. Back in 1992, Duley was criminally charged with battery against what appeared to be her now-ex-husband (and she filed a complaint against him as well). Later that same year, she was criminally charged with possession of drug paraphenalia with intent to use, charges which appear to have been ultimately dismissed.

Prior to the restraining order against Ivins which Duley obtained two weeks ago, Ivins had no criminal record at all, at least not in Frederick. A story in today's Frederick News-Post quotes Duley's fiancee as claiming: "She had to quit her job and is now unable to work, and we have spent our savings on attorneys." But she doesn't appear to have used an attorney for her complaint against Ivins. If anything, her savings were likely depleted from attorneys' fees, court costs, and fines and probation for her various criminal proceedings (Larisa Alexandrovna has more details on Duley).

None of this is to defend Ivins, nor is to suggest that this constitutes evidence that Duley is lying or is otherwise inaccurate in her claims. As I said, it's perfectly possible that Ivins is guilty of being the anthrax attacker. I have no opinion on whether he is. The point is that nobody should have any opinion on that question -- one way or the other -- until they see the FBI's evidence.

What is certain is that Jean Carol Duley is hardly some upstanding, authoritative source on Bruce Ivins' psychological state or his guilt, nor is she some accomplished and highly credible psychological professional, notwithstanding the fact that most media depictions of Ivins are based on uncritical recitations of her accusations. The fact that her depiction contradicts not only the claims of virtually everyone else who knew Ivins but also numerous facts about how Ivins was treated even by the FBI (see below), suggests a large amount of skepticism is warranted.

(3) The initial report from The Los Angeles Times' David Willman said that Ivins committed suicide "just as the Justice Department was about to file criminal charges against him for the attacks." But an article from The New York Times' Scott Shane this morning reported that the evidence against Ivins "was largely circumstantial" and that the "grand jury in Washington was planning to hear several more weeks of testimony before issuing an indictment."

According to The Washington Post, Ivins enjoyed full-scale clearance at Fort Detrick as late as July 10 -- hardly what one would expect if the FBI were so certain that he was the anthrax attacker. And judging from an article in today's local Frederick newspaper, The Frederick-News Post Online, the FBI is still searching for evidence against Ivins, as they removed two computers from a public library there.

Members of Congress with some personal stake in this case and who have been attempting to assert some oversight on the FBI's investigation over the last six years -- Tom Daschle, Pat Leahy, Rush Holt -- have been uniformly critical of how it has been handled. Numerous experts continue to raise serious doubts about whether Ivins even had the ability to access and handle anthrax of the type that was sent to Daschle and Leahy. Maybe the FBI's evidence demonstrates that he could and did. Maybe it doesn't. But under all circumstances, it's inconceivable that anyone would be content with having the FBI simply keep its alleged evidence to itself and not have a full public airing and accounting of what has happened here, an accounting that should include the news organizations -- led by ABC -- which are in possession of vital information that they continue to conceal.

UPDATE: The Democracy Now segment I did this morning included Dr. Meryl Nass, an anthrax expert and physician (curriculum vitae is here) who knew Bruce Ivins, and is strongly skeptical of the claim that he is the anthrax attacker. Dr. Nass made several excellent points, and I will post the link to the segment once it is available. She also has been raising many insightful points questioning the accusations against Ivins on her blog, which is here. It is worthwhile to begin at the start and scroll down.

Relating to ABC, a reader exchanged emails with Brian Ross this weekend, and Ross wrote this (the email was sent from Ross' ABC address; yesterday, I emailed both him and ABC's Jeffrey Schneider to request confirmation of its authenticity, and they didn't reply):

As we reported more than six years ago our information came from current and former government scientists. The report was discointed [sic] and denied by the White House which we reported. I believe now the scientists got it wrong although they insisted they were correct long after.

Actually, this is the first time, to my knowledge, that Ross has ever acknowledged that his sources for the bentonite story were "current and former government scientists." Given that he previously described his sources as being "well-placed," that means, presumably, that they were scientists with extremely close proximity to Fort Detrick (where the anthrax tests were being conducted) if not Fort Detrick scientists themselves. That would mean, if the FBI's accusation against Ivins is true, that the same Government lab where the attacks originated was the source for falsely telling Ross that tests revealed evidence linking the attacks to Iraq. In light of that, how can Ross possibly continue to conceal which Government scientists disseminated this false story?

It is also worth noting that Ross, who was a key witness in the Steven Hatfill litigation (since he had published numerous incriminating leaks from the DOJ) badgered at least one of his government sources, FBI spokesman Edwin Cogswell, to provide Ross with a release authorizing Ross to disclose the source's identity (allowing Ross to avoid being held in contempt by the court). Has Ross sought a similar release from his bentonite sources? Clearly, at least in some instances, Ross is able to convince his sources to allow him to disclose their identity when he is properly motivated to do so. For the reasons Professors Rosen and Gillmor point out, no release should be necessary, since these sources fed him deliberate falsehoods, but one wonders if Ross has even tried to persuade them to give permission for Ross to disclose who they are.

UPDATE II: Pulitzer Prize winning reporter John McQuaid calls on ABC News and Brian Ross to provide a full account of how they ended up publishing the false bentonite story.

UPDATE III: The video for the aforementioned Democracy Now segment with me and Dr. Nass is now available here (the segment begins at roughly 13:00). The transcript will be posted shortly.

UPDATE IV: I was on Warren Olney's To the Point program today discussing the anthrax case, which can be heard here (segment begins at roughly 43:00).

Just as they did with Steven Hatfill (and Iraq before him), government sources continue to try to convict Bruce Ivins in the media of being the anthrax killer by anonymously leaking incriminating claims about him (all while insisting that they can't unveil their evidence against him because the case isn't yet closed). If this latest leak is indicative of the FBI's case against Ivins -- "The top suspect in the 2001 anthrax attacks was obsessed with a sorority that sat less than 100 yards away from a New Jersey mailbox where the toxin-laced letters were sent, authorities said today" -- then it's no wonder they are reluctant to tell the public the basis for their accusations against him.

The top suspect in the 2001 anthrax attacks was obsessed with a sorority that sat less than 100 yards away from a New Jersey mailbox where the toxin-laced letters were sent, authorities said today.

Wow. Incriminating. Now, the AP article has been "updated" to this (h/t Jim White):

The mailbox just off the campus of Princeton University where the letters were mailed sits about 100 yards away from where the college's Kappa Kappa Gamma chapter stores its rush materials, initiation robes and other property. Sorority members do not live there, and the Kappa chapter at Princeton does not provide a house for the women.

So apparently, the Big Incriminating FBI Leak of the Day is that Ivins was so obsessed with this sorority that he used the mailbox near where it "stores its rush materials, initiation robes and other property," and used that mailbox to send anthrax to Pat Leahy, Tom Daschle and Tom Brokow. That's really convincing. Let's close the investigation. We clearly got the Anthrax Killer. The FBI looked through its bag of conclusive evidence and that is what they chose to leak today? And amazingly, the Keystone Cops in our Government and their Media allies can't even get a leak this laughable right the first time they convey it. Ask Steven Hatfill about that. As The Hartford Courant Editorial Page today wrote (h/t macgupta):

We're not weighing in on Mr. Ivins' innocence or guilt. In light of the FBI's handling of the case against Mr. Hatfill, however, we are concerned that Mr. Ivins may have been the victim of overzealous investigation.

Congress should press the Justice Department for a full and public accounting of this case. Forcing the FBI to lay out its evidence against Mr. Ivins is the only way the public can be sure the agency's methods were reasonable. It's only fair.