A lot of RNCC viewers were perplexed last night when McCain appeared from the light of the Obama logo, strolled to the podium, and began his lackluster speech before an enormous green screen. We'd seen that lime green screen before and thought McGrinch had learned his lesson -- it was not a good look for McCain and was widely panned by pundits and the public alike. So, why would he choose that hideous background for the biggest speech of his very long political career?

It turns out the green screen was only part of the story. The close-up at the podium made it appear to be a giant green screen, but the arena audience was treated to a much different image. Hat tip to Talking Points Memo for the image: 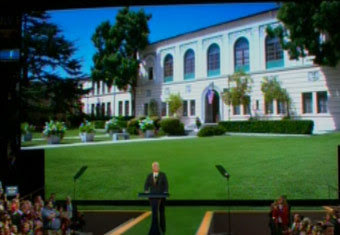 Aaahhhhhh....much different. McCain standing in front of a grand building, not a green screen. And what building could possibly deserve such a prominent role as the main backdrop of McCain's nomination speech? According to TPM readers, it is Walter Reed. As in Walter Reed Middle School in North Hollywood, California. 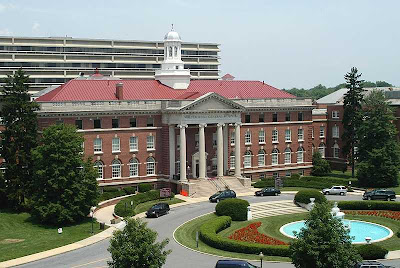 ABC News says the McCain camp isn't commenting. If they meant for the image to be Walter Reed Middle School in North Hollywood, I'm sure we'd all love to hear why that fine school was selected for such an honor.

Between the lack of vetting on Sarah Palin and the botched presentation this decade week to the American people, the McCain camp would be well-advised to "do the google" a little more often. Let's hope they have plenty of time to explore the world wide web in November and beyond.

Update: TPM has been in contact with the school.

TPM's Kate Klonick just got off the phone with an official at the school who confirmed this. "We didn't know anything about it until it showed up last night," Cathy McLaughlin, the school's office technician, told Klonick. She confirmed that multiple media outlets have been calling and that a statement would be forthcoming from the school.

There was nothing particular in that stretch of McCain's speech that would explain why this particular image was used.