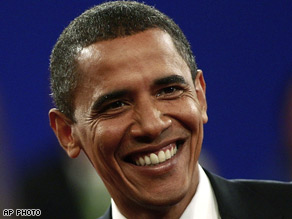 Fifty-four percent of those questioned in a CNN/Opinion Research Corporation survey conducted after the debate ended said that Obama did the best job in the debate, with 30 percent saying John McCain performed better.

A majority, 54 percent, said Obama seemed to be the stronger leader during the debate, to 43 percent for McCain. By a greater than two to one margin — 65 percent to 28 percent — viewers thought Obama was more likeable during the debate.

"Obama had made some gains on the leadership issue even before the debate," said CNN Polling Director Keating Holland. "McCain's advantage on leadership shrunk from 19 points in September to just five points this weekend. If Obama can use this debate to convince Americans that he is a stronger leader than McCain, he may be difficult to defeat."

Half of those polled say Obama answered questions more directly, 13 points ahead of McCain, and by a 14 point advantage debate watchers thought Obama seemed to care more about the problems of audience members who asked questions.

McCain did come out on top in one category that neither candidate wants to win: By a 16 point margin, debate watchers thought McCain seemed more like a typical politician during the debate.

"For McCain, the key finding may be that his favorable rating did not change at all," Holland said. "It's unclear whether Obama will gain any momentum from Tuesday night's debate, but it looks like McCain will not do so, and for a candidate who has consistently been a few points behind in national polls, that's not a good sign."

The poll suggests that independent voters thought Obama won the debate. Fifty-four percent of those identifying themselves as independent say Obama performed best, with 28 percent saying that McCain did the better job.

The CNN/Opinion Research Corporation poll was conducted by telephone with 675 adult Americans who watched the debate. All interviews were taken after the end of the debate. The audience for this debate was 38 percent Democratic and 31 percent Republican — very close to the partisan breakdown among all Americans nationwide. The survey's sampling error is plus or minus 4 percentage points.